Easy Fall Desserts to try this season. Enjoy these sweet recipes made with pumpkin spice, caramel, butterscotch, cinnamon and apples. Plan ahead for Halloween and Thanksgiving with these fun treats.  Favorite Fall Desserts You’ll Love! Who’s excited about fall desserts? With cooler weather and Thanksgiving coming up soon, I thought it would be fun to […]

My Grandma Chunkie made the best Chocolate Pie! With only 5 ingredients, this rich chocolate pie recipe is a quick and easy dessert everyone loves! 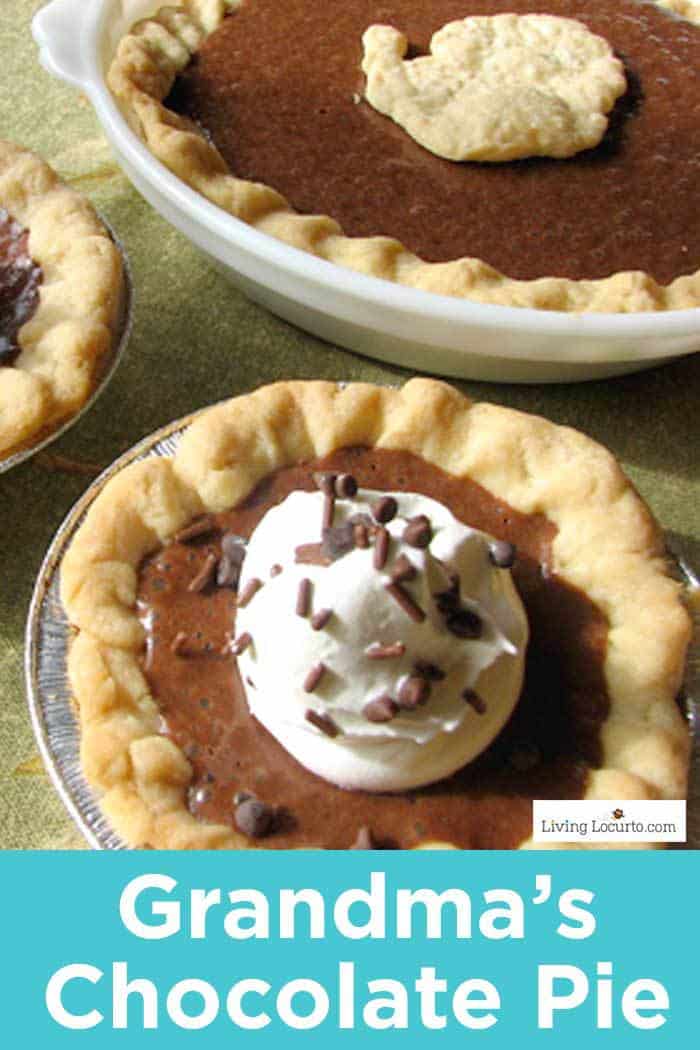 This chocolate pie recipe is our family tradition thanks to my fun Great-Grandma Chunkie! I remember Grandma Chunkie as a fun little spit fire with pink tinted hair and always wearing a cute apron. I guess she was heavy as a child and that’s where the name came from. All my great-aunts and uncles had nicknames. One was even called Aunt No No.

I loved going to Grandma Chunkie’s house, because she was always baking something tasty. She grew up working in her family’s restaurant in Tulsa. She also let me play with all her jewelry (clip on earrings!) and make-up. I loved hearing stories of her travels and times when she dated a pro-wrestler… the kind like you see now on the WWF! Ha.

She would tell me crazy stories, like how you had to be careful traveling back when she was a girl because Indians would kidnap you. Or the time she and her brother ran away when they were really little. They tied themselves together so they wouldn’t get lost (or kidnapped by Indians) on the train. Who knows what was the truth? Ha! 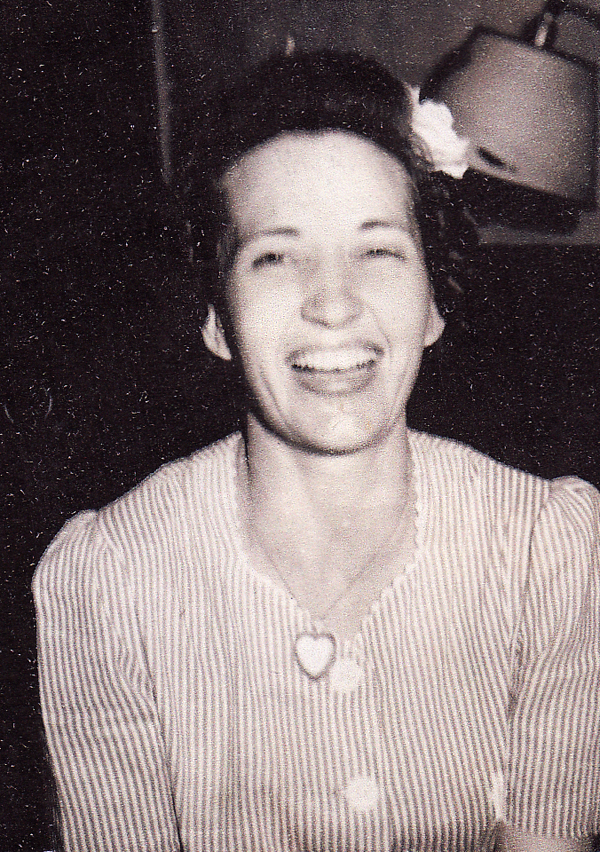 Born in 1908 as Lily Maybell, Grandma Chunkie later changed her name to Lillian.

Grandma Chunkie was also a sister of Christ! When I would go on ski trips, she would pray on a cloth and make me put it in my pocket to keep me safe:-) In college, I would get these little prayer cloths in the mail every now and then.

Grandma Chunkie made THE best pies! Usually for our Thanksgiving dinners, we would have about three pumpkin pies along with banana, lemon and chocolate. I never liked pumpkin pie, so she always made me my own mini chocolate pie. A Thanksgiving tradition, I started with my kids. I’ve posted this recipe before, but in case you missed it, here it is again. Enjoy!!

For all you chocoholics, this pie is a must! Here’s the recipe that she wrote on a small piece of paper. You can print the recipe below.

Did you have a grandma like my Great Grandma Chunkie? Grandma’s Chocolate Pie recipe. With only 5 ingredients, this rich chocolate pie recipe is a quick and easy dessert everyone loves!

This creamy, fresh homemade Coconut Cream Pie Recipe is a mouth-watering dessert wonderful for any occasion! It’s just like Grandma’s recipe and easy as pie! 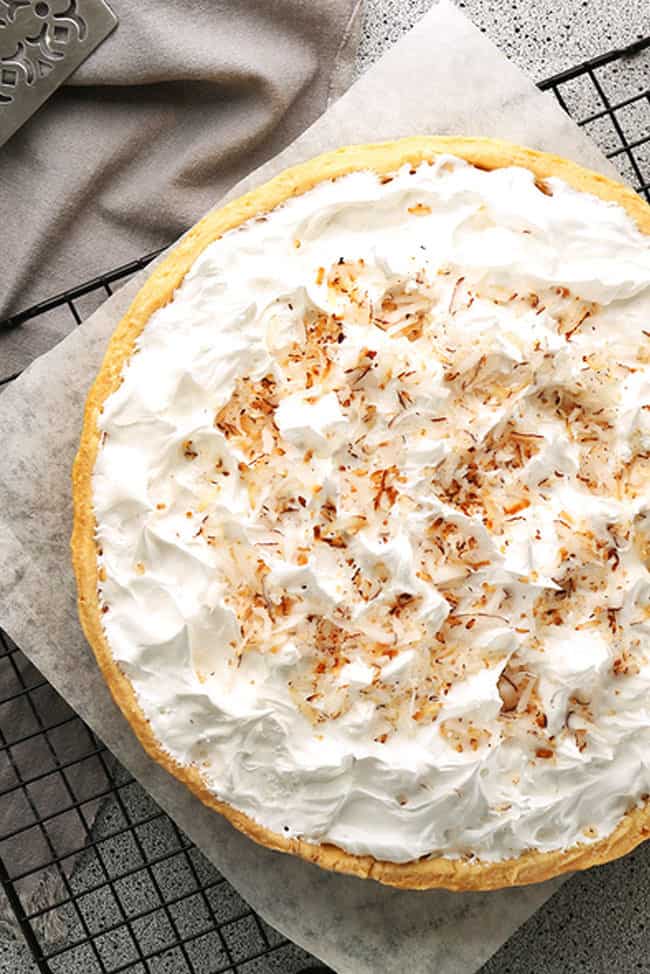 Desserts are a funny thing and not everyone loves Coconut Cream Pie, but I bet you’ll like this one! We all have our favorite desserts, you know the ones you would pick over anything else. Maybe it’s your grandmas famous pound cake, or the crazy lady down the streets delicious cookies. Well for me, hands down I choose pie! I really like pretty much any pie, but a chilled Coconut Cream Pie will never get turned down by me.

After trying out several different Coconut Cream Pie recipes, this is the best in my opinion. Not too sweet, not to thick but just right! The only thing to argue about is how long to let it chill before cutting into it. Sometimes patience is the most difficult part of making a pie!

How to make a Coconut Cream Pie 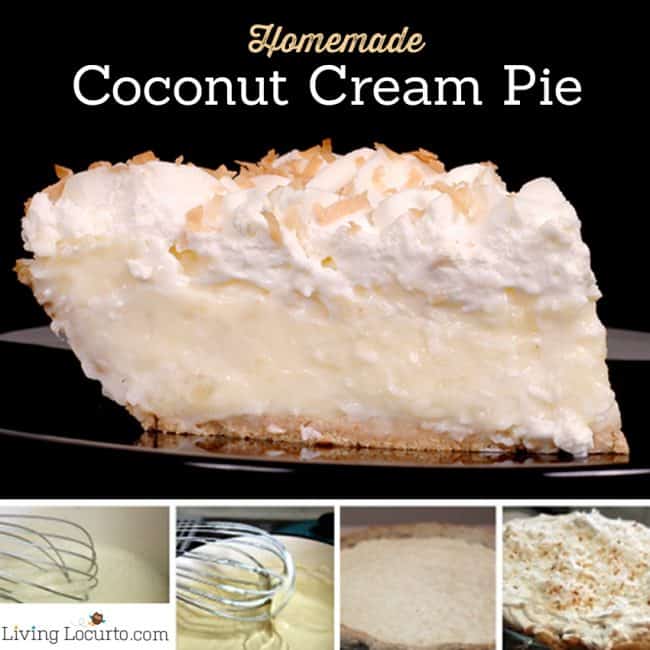 What you’ll need for making Coconut Cream Pie…
Filling Recipe
Whipping Cream Recipe
Crust Recipe
Before you begin with the coconut cream pie filling, get your crust ready. If you do not feel up to making homemade pie crust, no problem! Get one already made, and follow the directions on the package for using with a cream pie recipe. If you are feeling wild and crazy, follow this Coconut Cream Pie recipe below.

This creamy, fresh homemade Coconut Cream Pie Recipe is a mouth-watering dessert wonderful for any occasion!

I love anything lemon and these cute Little Chick Lemon Tarts are the perfect dessert recipe for spring!

I have a fond memory from childhood of being put inside of a pen full of baby chickens. Cute and soft little yellow baby chicks hopping all around me! Ever since then, I’ve had a love of chickens. I even had a pet chicken named Chicken Little when I was in grade school. Ha!

When Jill showed me this fun food recipe idea she made for us, I couldn’t have been more smitten. Two of my favorite things! These tasty lemon tarts are easy to make and you can decorate them into these sweet chicks in minutes. Such a cute and yummy treat that both kids and adults will love!

END_OF_DOCUMENT_TOKEN_TO_BE_REPLACED

The worst part about burnout is that it cannot be contained — at least, not indefinitely. The effects eventually spill over into every part of your life.

The post I Keep Crying All The Time — And Other Signs Of Burnout appeared first on Scary Mommy.

Skin picking, nail biting, and other compulsive behaviors have increased since COVID-19, which kind of makes sense. We feel like we’re lacking control.

The post Skin Picking, Nail Biting, And Other Compulsive Behaviors Have Increased During The Pandemic appeared first on Scary Mommy.

It’s weird when you finally have to find a good face wash for your teen. It was only yesterday you were picking out *your* first facial cleanser  — how did we get here?! Anyway. Being a teenager is hard enough without having problem skin to deal with. With teenage hormones come teenage breakouts, so it’s […]

The post The Best Face Washes For Teens With Oily, Sensitive, And/Or Acne-Prone Skin appeared first on Scary Mommy.

Kids tank tops are a wardrobe staple, and not just during the sticky, hot summer months. My daughter uses them as undershirts when she wears a frilly dress so she doesn’t get too itchy, and they can also be used as a layering piece under a hoodie or cardigan during those transitional seasons (lookin’ at […]

The post Here Are Some Cute, Functional, And Comfortable Tank Tops For Kids appeared first on Scary Mommy.

People out here ready to vote for The Rock as though we didn’t just learn what having a celebrity president can mean Despite how well things went the last time we elected a celebrity with absolutely no political experience to the presidency (gestures broadly at the years 2016 through 2020), a new poll is showing […]

The post 46% Of Americans Support The Rock Running For President And We’d Like A Word appeared first on Scary Mommy.